Brora is the only village in the parish of Clyne. The name Clyne comes from the Gaelic word Cluain, meaning a meadow. The river Brora, a famous salmon water, flows from the foothills of Ben Armine through Loch Brora to the sea, and is indelibly etched in village history in that the name Brora is derived from it, the Norse "Bruar-a", Bridgewater. Brora is a Viking name.

The oldest memorial in the parish of Clyne is the chambered cairn on the north shore of Loch Brora, near Gordonbush, which is said to date from around 1000 BC. Not quite so ancient is the hill fort of Craig Barr on the south side of Loch Brora, towards its seaward end, which is defended on two sides by natural cliffs. Ruined walls are still visible at each end of the fort and hint at what must have been a massive construction.

The Picts have left their mark on Brora with surviving ruins of broch sites at Strath Steven, Kintradwell, four around Loch Brora, as well as quite a few others, such as Carn Bran in Glen Loth, Caisteal na Coille in Strath Brora, and Coich Burn near Balnacoil. To find out more about brochs, the Iron Age and the Roman defeat at the Battle of Mons Graupius near Burghead, please visit my brochs website - HighlandBrochs.com. This is Caisteal na Coille, or Castle Cole as it is also known, with Ben Armine in the distance. 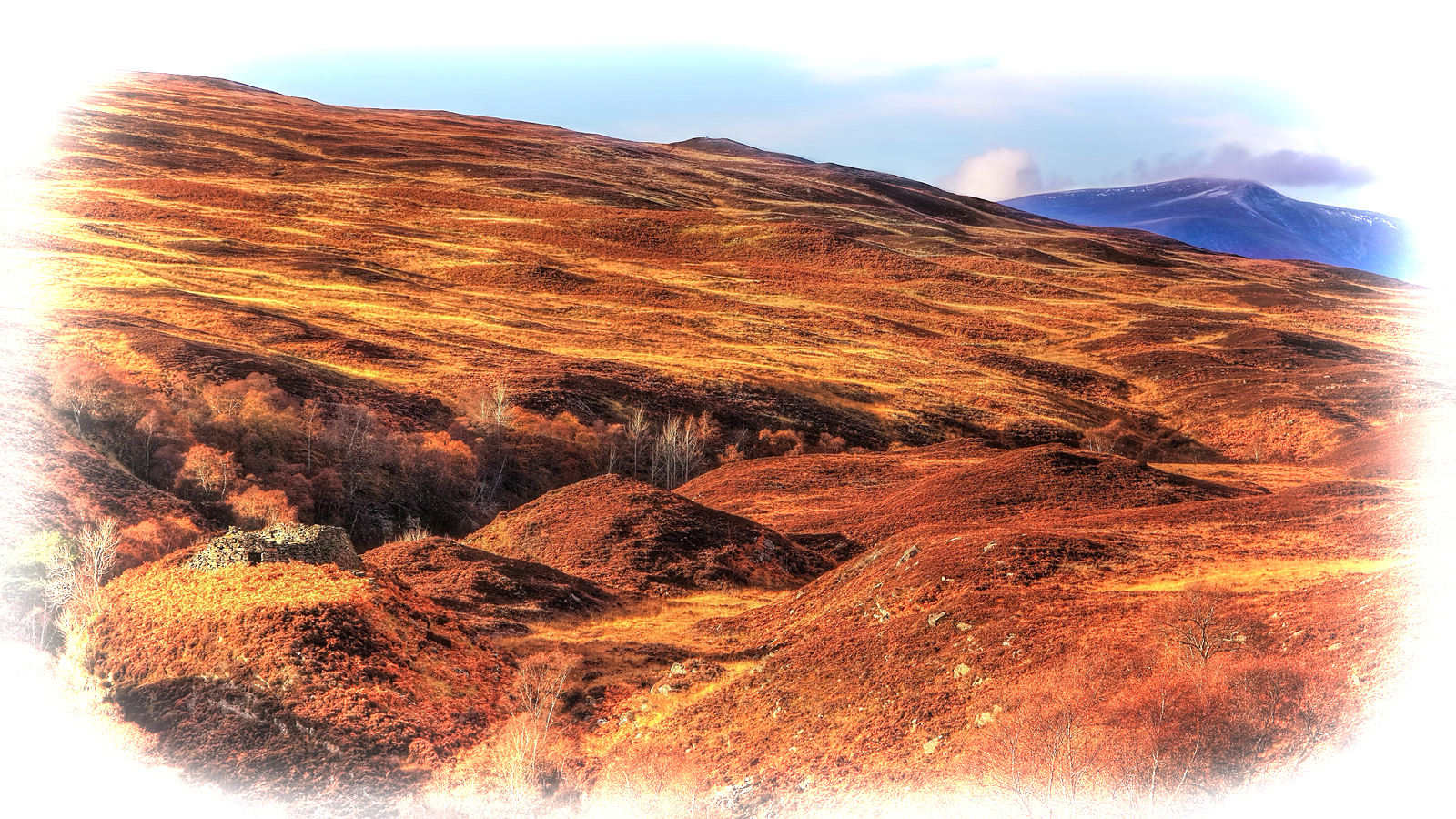 Centuries ago the River Brora flowed into the sea at Inverbrora. Later, when Scotland popped up out of the ocean this sea loch dried and is now farmland. This ancient lake was at one time an inlet of the sea rather than a fresh water loch as some suppose. The tops of the cliffs along the coast, as seen at the Coves for example, would have been the shoreline before this geological upheaval. I know modern geologists think this upheaval occurred millions of years ago, but I think it occurred at some point after the Iron Age and that would explain why many Iron Age brochs and cairns are built on what is high ground today.

Brora is also of geological interest, and many geologists of note have spent time here. In 1812, Sir Humphry Davy visited the county, and while he was here compiled a geological manuscript which was later gifted to Dunrobin Castle. There are exposed Jurassic rock faces carved from the hillsides by the River Brora as it makes its way to the sea. The shores from Strathsteven to Greenhill were once below water, and more Jurassic rock full of fossils has also been exposed by the tides.

Loch Brora has enjoyed various water levels at differing times which can be observed in terraces along the banks. At West Clyne there are moraines, mounds of gravel left by retreating glaciers during the ice age. Stone from the old Clynelish quarry is prized for its durability, and was used in the construction of both London bridge and Dunrobin Castle.

Coal was discovered in Brora in 1529, and Brora boasts the oldest coal pit in Europe. The coal, which lies within the Jurassic system, was used in the production of salt produced from sea water near Lower Brora. Farther inland, the first coal pit shaft was sunk in 1598. Credit for this is given to Lady Jean Gordon, widow of Earl Alexander of Sutherland. In 1601 her son, Earl John, who was impressed by the industrial possibilities of Brora, was instrumental in having the village elevated to the status of a burgh. Although power was given to create bailies and councillors, there is no evidence that this was ever done. However, both the coal and salt industries proved uneconomic and languished. In 1614, a serious attempt was made to revive them, the local coal heughs were repaired and more salt pans were erected, but after a time they were again abandoned.

During the 17th century, salmon fishing flourished at Loch Brora. In 1638 salmon to the value of 300 pounds, a princely sum in those days, was exported to France and other parts of the world.

In 1798, the Marquis of Stafford made arrangements to again revive the coal and salt industries. He spent considerable sums to get the coal works into order, and constructed a short railway from the harbour to the four large salt pans along the shore. However, when the salt tax was abolished in 1823, salt production became uneconomic, and as coal was not in much demand due to overwhelming competition from peat, the coal pit was again closed.

In 1815 a small brewery was built near the harbour, paid for by Lady Stafford who said she wished to encourage the drinking of beer rather than whisky. The brewery however, was eventually converted into a smoke house for kippering herring, and no longer exists.

In 1818 the Stafford Arms Inn was built near the harbour and lasted until 1950 when it was demolished. In 1819, Clynelish distillery was built by the Duke of Sutherland.

Up until 1820 the only road north and south was a mere track by the seashore. By 1840 there were 30 miles of road and 15 bridges in the parish of Clyne. There was a sub-post office with a receiving house built by subscriptions from the inhabitants. The mail coach, which was drawn by two horses, passed through the village daily. The building which housed the post office is still in good condition.

In 1840 there were three schools in the parish of Clyne, the parish school, the Doll school, and a sewing school for girls endowed by the Duke of Sutherland. In 1966, a combined primary and secondary school was opened at the current site. Brora High School was the first school in Scotland to incorporate within the same building a community centre, public library, centre depot for county libraries, and education authority administrative offices.

The House of Sutherland, although harshly judged for the clearances, (they paid the passage for some of their poverty stricken tenants to get to the Americas where they were given land and new lives, and who for the most part were glad to go) busied itself by establishing local industries. They constructed the harbour at the mouth of the River Brora, founded a distillery, built a brickworks, financed the first railways, built the mound crossing, and revived the coal and salt-making industries.

Using Brora brick, the Duke of Sutherland built an engineering shop for railway repair, and on the same site built a carpentry shop, grain store, weaving shed, sawmill and an office. The Duke loved railways and had his own steam engine which he drove on a branch line which crossed Victoria Road so he could reach the engineering shop.

Furniture constructed in the carpentry shop included writing desks and the counters that were used in the Town and County Bank which was opened in 1874 in Rosslyn Street. In the engineering shop a small engine called The Florence was constructed to transport coal and brick to the railway station and the harbour. 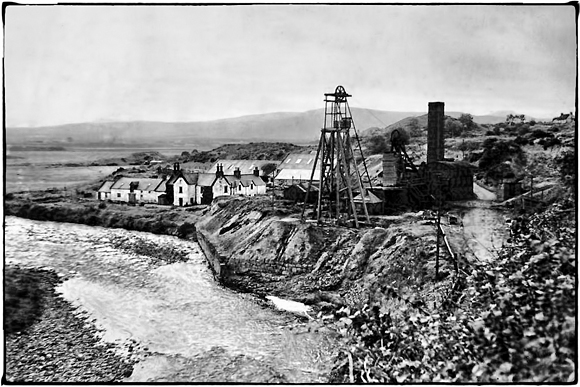 The Coal Pit with the brickworks behind it

Brora harbour is a fascinating part of the village, rich in history that even includes supplying salt for the herring fleets of past centuries. Modernisation of the harbour began in the early nineteenth century with the construction of piers, warehouses, curing yards, and an ice house. It was during this period of modernisation that Brora grew to became recognisable as the village it is today.

Early in the 19th century the brick works began to manufacture Brora brick and tile from clay. It was built on the banks of the River Brora. 14,700 bricks and 7000 drain tiles all fired by Brora coal were shipped from the harbour. The brick works was closed along with the colliery in 1828.

Towards the end of the 19th century, a wool mill was built on the site of the previous sawmill. It was bought in 1901 by Mr T. M. Hunter, a descendant of a Galashiels wool manufacturer.

Two freestone quarries, one at Spouty and the other at Braambury Hill near Clynelish, provided steady work. The stone produced was used mainly for domestic purposes, but much was exported.

Brora colliery was eventually leased to Mr Melville, manager of the grain store, and it was worked by him and his son until 1914. Mr R. Mackay, who had been the Duke of Sutherland's clerk to the colliery opened a high-class grocery business in Bridgend and afterwards Bridge House, where he also had a draper's shop. The oldest established draper's shop at this time, opened in 1850, was owned by Mr W. Sutherland, the postmaster. Another long-established business was the Sutherland Arms Hotel, built in 1818 by Mr Gordon, of Embo.

In 1914, as the clouds of war gathered over Europe, Captain TM Hunter leased the colliery, and operated it until 1949.  The colliery and brickworks were taken over by a company named Brora Coal and Brick Co.  Afterwards, with a grant from the Highlands and Islands Development Board, the pit was run by Highland Colliery Ltd., and subsequently the miners themselves became shareholders. 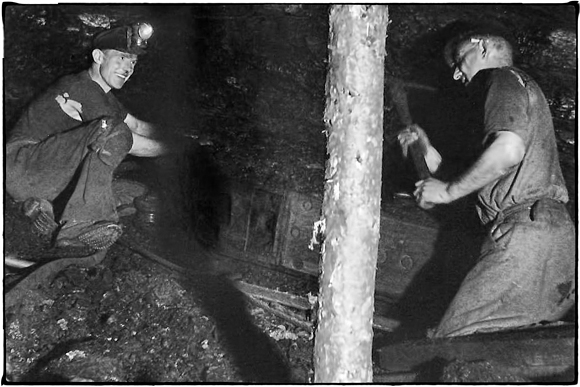 The first buildings in Brora to have electric light were Clynelish Distillery, the Station Hotel (which was sited behind the Railway Station on what is now Victoria Crescent and which later burned down in 1924), and the Wool Mills, the plants being installed between 1903 and 1905. 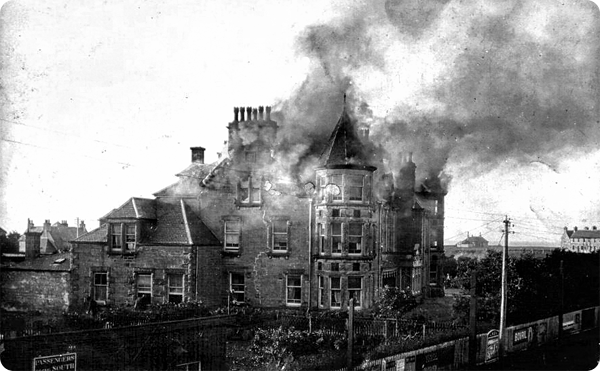 In the winter of 1912, Captain Hunter erected three electric street lights, and it comes as great surprise to many to discover that Brora had electric street lighting before the First World War. Electricity was supplied to the public in 1913 by the Brora Electric Supply Company, founded by the late Captain Hunter, and was supplied to local shops and houses, the generators driven by steam from the mill boilers. The lighting was switched on by Mr T. M. Hunter's sister, Mrs Bannerman.

When street lighting was restored after the war, the demand for electricity became so great that the plant had to be enlarged. In 1938 the responsibility for public lighting was assumed by the Grampian Electricity Supply Company.

A government radio receiving station was built in Brora in 1939, which attracted a local network of MI6 men and women and their families to the village. The station was a satellite tracking station and was responsible for Russian missiles being aimed at Brora during the 1970s.

In 1968 the coal pit was closed, and a walk-in mine constructed further upstream was opened. In June 1973, Highland Colliery Ltd went into liquidation. In 1973, a mining engineer, Mr E Pritchard, from Stockport in Cheshire took over the mine, but because of labour difficulties it closed on 1st March 1974. Negotiations were set afoot by a London firm but nothing came of them. Eventually the mine was closed, the pithead gear dismantled, and the plant sold at auction. 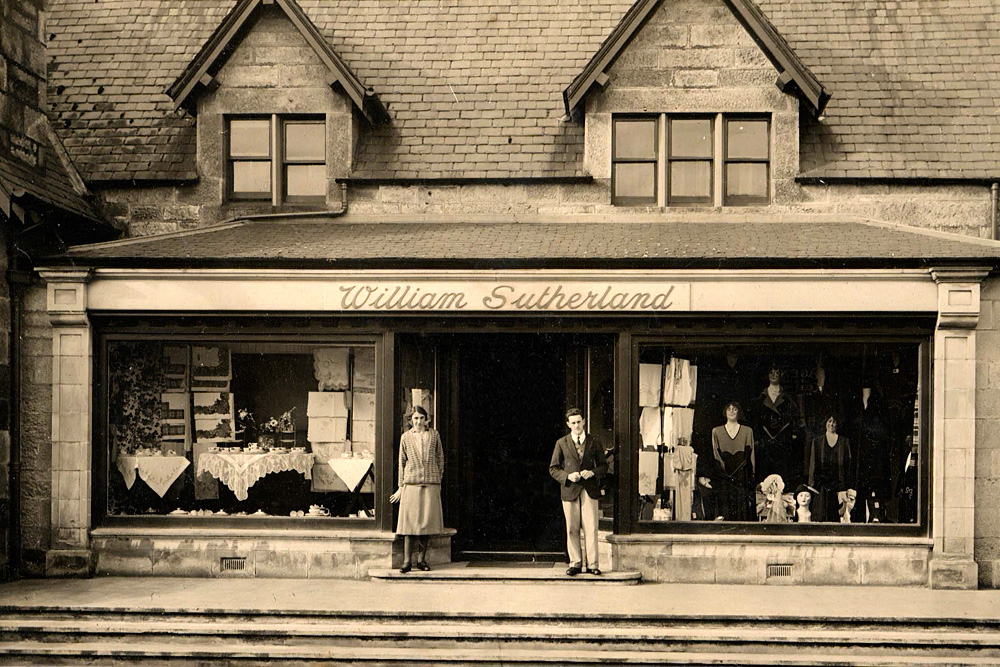